The Myrtles Plantation is a historic home and former antebellum plantation in St. Francisville, Louisiana, United States. Built in 1796 by General David Bradford, it is touted as "one of America's most haunted homes."

The Myrtles Plantation was built in 1796 by General David Bradford on 600 acres (0.94 sq mi; 2.4 km2) and was named "Laurel Grove." Bradford lived there alone for several years, until President John Adams pardoned him for his role in the Pennsylvania Whiskey Rebellion in 1799. He then moved his wife Elizabeth and their five children to the plantation from Pennsylvania.[5] Upon Bradford's death in 1808, his widow Elizabeth continued running the plantation until 1817, when she handed the management to Clarke Woodruff, one of Bradford's former law students, who had married her daughter, Sara Mathilda. The Woodruffs had three children: Cornelia Gale, James, and Mary Octavia, before Sara Mathilda and two of her three children died in 1823 and 1824 of yellow fever.[6][7]

When Elizabeth Bradford died in 1831, Clarke Woodruff and his surviving daughter Mary Octavia moved to Covington, Louisiana, and left a caretaker to manage the plantation. In 1834, Woodruff sold the plantation, the land, and its slaves to Ruffin Gray Stirling. Stirling and his wife, Mary Catherine Cobb, undertook an extensive remodeling of the house, nearly doubling the size of the former building, and filling the house with imported furniture from Europe. It was during this time that the name was changed to "The Myrtles" after the crepe myrtles that grew in the vicinity.[8] Stirling died in 1854 and left the plantation to his wife.[6]

Thy Myrtles survived the American Civil War, though robbed of its fine furnishings and expensive accessories. In 1865, Mary Cobb Stirling hired William Drew Winter to help manage the plantation as her lawyer and agent. Winter was married to Stirling's daughter, Sarah, and they went on to have six children, one of whom (Kate Winter) died from typhoid at the age of three. The family fortune was lost in the aftermath of the war due to it being tied up in Confederate currency, and the Winters were forced to sell the plantation in 1868, but were able to buy it back two years later.[6][8] In 1871, William Winter was killed on the porch of the house, possibly by a man named E.S. Webber.[9] Sarah remained at the Myrtles with her mother and siblings until 1878, when she died. Mary Cobb Stirling died in 1880, and the plantation passed to her son Stephen. The plantation was heavily in debt, however, and Stephen sold it in 1886 to Oran D. Brooks, who in turn sold it in 1889. The plantation changed hands several times until 1891, when it was purchased by Harrison Milton Williams.[6] 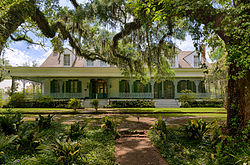 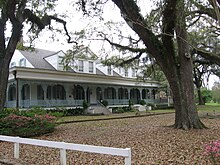