Rosedown Plantation is an 8,000-square-foot (740 m2) historic home and former plantation located in St. Francisville, Louisiana, United States. Built in 1835 by cotton planters Daniel and Martha Turnbull, it is one of the most documented and intact plantation complexes in the South and is known for its extensive formal gardens surrounding the house.

Society in and around St. Francisville, at the time that Rosedown was constructed, was dominated by European, primarily British, settlers who became cotton planters on an enormous scale. Most of the 19th-century cotton barons in the area had requested and received their plantations lands through the Spanish government, the titles to which remained valid after the establishment of the United States government. The parents of Martha Barrow Turnbull, who owned the land that later became Rosedown, achieved high social status in West Feliciana through their immense cotton operations, and Daniel Turnbull himself was known before the Civil War as one of the richest men in the nation.

Rosedown, named for a play that the Turnbulls saw on their honeymoon, was not assembled via Spanish land grants, but in a group of seven purchases made by Daniel Turnbull from the 1820s through the 1840s. At its largest, Rosedown comprised approximately 3,455 acres, mostly planted in cotton. Daniel and Martha began construction on the main house at Rosedown in November 1834, completing it six months later in May 1835 for a total cost of $13,109.20. The contribution of slave labor to the construction and upkeep of the plantation, as well as to the agricultural prosperity and wealth accrued by Daniel Turnbull, was immense. During peak years of cotton production, Daniel owned 444 slaves with around 250 working just at Rosedown. 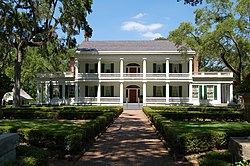