Edmondson Hall was built in 1856 just outside Meadowview, this brick, Greek Revival house has withstood time very well. William Campbell Edmondson, an early pioneer and merchant, built the house, and the original parcel included 383 acres (1.55 km2) in the fertile valley. On June 11, 1998 the house was listed on the National Register of Historic Places.

In the early years of the house, the bedrooms were probably fully occupied by children. William and Susan Edmondson were the parents of five children. William remarried after Susan's death to Sarah Edmondson and they both had three children. In addition to the family living here, the Edmondsons in 1860 owned 14 slaves, seven of whom were children under the age of 12. Two slave cabins were located on the property as well. 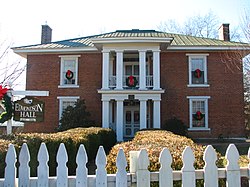