John Taylor Johnstone, born on April 28, 1801, migrated with his family to Mississippi from Hillsborough, North Carolina about 1820. He eventually had total land holdings of 2,600 acres (1,100 ha), divided among a number of plantations, and engaged in farming. Through this he accumulated a fortune from the cotton market.

The Johnstones had two daughters, Frances Ann and Helen Scrymgeour Johnstone, and two sons, Samuel and Noah Thompson Johnstone. Both sons died in 1840, the same year that the family moved to Mannsdale.[1] Johnstone used part of his fortune to build Ingleside, a family plantation house in the Mannsdale area, for Frances and her husband, as she was his first daughter to marry.[4]

After his death, his widow Margaret Johnstone built a chapel and another plantation house, Annandale, on the large plantation property. She donated the chapel and some property to the Episcopal church in her husband's memory.[4] 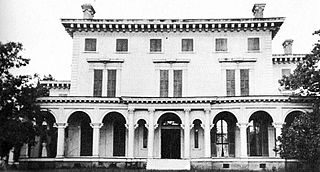