Holly Grove Plantation House was built ca. 1832 by Noel and Jane Killingsworth near Red Lick, Mississippi, and dismantled and reconstructed 70 miles (110 km) to the north in Hinds County, Mississippi, in 1990.

The house, a mixture of federal and Greek Revival architecture, was originally constructed from a kit manufactured in Cincinnati, the components of which were shipped down the Ohio and Mississippi rivers to Rodney, Mississippi, and transported to Red Lick by wagons along with a crew supplied by the manufacturer, believed to be Hinkle, Guild & Co. The frame of the house, of post-and-beam, mortise-and-tenon construction, includes numerous interchangeable components (indicating manufactured millwork), with Roman numeral markings. The original foundation sills were hewn on site, with manufactured framework of poplar, spruce and fir, exterior siding and trim of cypress, walls and ceilings of tongue-in-groove spruce and fir and floors of heart pine. 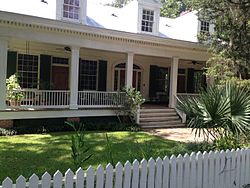