Longwood, also known as Nutt's Folly, is an historic antebellum octagonal mansion located at 140 Lower Woodville Road in Natchez, Mississippi, United States. The mansion is on the U.S. National Register of Historic Places, and is a National Historic Landmark.[3][4] Longwood is the largest octagonal house in the United States.[5]

The mansion is known for its octagonal plan, byzantine onion-shaped dome,[6] and the contrast between its ornately-finished first floor and the unfinished upper floors.

Samuel Sloan, a Philadelphia architect, designed the home in 1859 for cotton planter Dr. Haller Nutt.[7] Work was halted in 1861 at the start of the American Civil War. Dr. Nutt died of pneumonia in 1864, leaving the work incomplete. Of the thirty-two rooms planned for the house, only nine rooms on the basement floor were completed.

Haller Nutt's never-finished Natchez home, Longwood, was the last burst of southern opulence before war brought the cotton barons' dominance to an end. Longwood survived decades of neglect and near-abandonment to become one of Natchez' most popular attractions.[8] 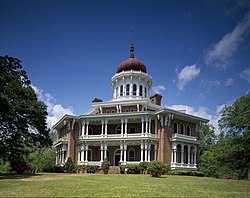