Hampton Plantation today consists of just under 300 acres (120 ha) of land on the banks of Hampton Creek, a tributary of the Santee River in northern Charleston County, South Carolina, west of United States Route 17. Most of the plantation land is no longer in agricultural use, and has reverted to natural wooded and swampy conditions. The main house, set near Hampton Creek, is a large 2-1/2 story wood frame structure, with a dormered hip roof, clapboard siding, and a raised brick foundation. Its most prominent exterior feature is a projecting temple front, with eight Doric columns (six across and two additional on the sides) supporting a decoratively carved Adamesque frieze and pedimented gable. This feature, added in 1790-91, is believed to be the first of its type in the United States. 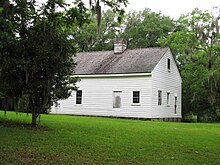 The house has an evolutionary construction history, begun in 1735 and ending roughly in 1790-91. The original core of the house was built in 1735 by Noe Serre, a French Huguenot refugee, and was a central-hall two-story structure. The property was acquired in 1757 by Daniel Horry, who greatly expanded the building, adding a two-story ballroom on one side, and a master bedroom suite on the other. In order to ensure symmetry of appearance, Horry had false shuttered windows placed on the front walls of these additions. The front portico is the last major alteration made to the building.[4] The Horrys, along with later owners from the Pinckney and Rutledge families, were all from politically and economically prominent South Carolina families. The last private owner the property was Archibald Rutledge, the state's first poet laureate. Mr. Rutledge’s 1941 book titled, “Home by the River”, describes his 1937 return to Hampton Plantation after a thirty-three year absence. Included is the tale of his efforts to single-handedly restore the plantation, and it’s 209 year old house, all of which had been in his family since 1686. Pat Conroy, in his book, My Reading Life, recalls meeting Rutledge at Hampton Plantation when Conroy was an aspiring writer still in his teens, and Rutledge discussing writing, and the history of the Plantation, with him.[5] The property was acquired by the state in 1971.