Andalusia is the name of Southern American author Flannery O'Connor's rural Georgia estate. The estate is located in Baldwin County, Georgia, approximately 4 miles (6.4 km) northwest of Milledgeville. It comprises 544 acres (2.20 km2), including the plantation house where O'Connor wrote some of her last and best-known fiction.

The land on which Andalusia was first built had in the mid-19th century been a working plantation of between 1,500 and 1,700 acres owned and operated by Joseph and Mary "Polly" Stovall. After Polly Stovall's death, the estate was purchased at a public auction by sometime mayor of Milledgeville, Nathan Hawkins, and later sold to Col. Thomas Johnson of Kentucky in 1870.

In 1951, Flannery O'Connor returned to her home state of Georgia, where she had grown up, after being diagnosed with a form of lupus. She first lived in the family home of her mother, Regina, on Greene Street in Milledgeville, then owned by her uncles Louis and Bernard Cline. There, she finished her manuscript for her novel Wise Blood and, with her health improving, she moved with her mother to Andalusia, then still a working farm. She had visited the home every summer in her childhood. Her mother had jointly inherited the 544-acre property along with her brother Louis Cline from their uncle. 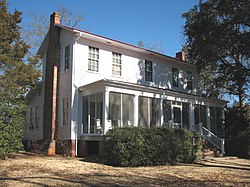