The Beauvoir estate is notable as the historic post-war home (1876-1889) of the former President of the Confederate States of America, Jefferson Davis, (1807/08-1889), (who was also former U.S. Representative, (1845-1846), and more influentially as United States Senator from Mississippi, (1847-1851, 1857-1861) and in between U.S. Secretary of War, (1853-1857), under 14th President Franklin Pierce). Its construction was begun in 1848 facing the Gulf Coastline (Gulf of Mexico) at Biloxi, Mississippi. It was purchased earlier in 1873 by the planter Samuel Dorsey and his wife Sarah Dorsey. After her husband's death in 1875, the widow, Sarah Ellis Dorsey learned of former Confederate President Jefferson Davis' difficulties. She invited him to visit at the plantation and offered him a cottage near the main house, where he could live and work at his memoirs ("Rise and Fall of the Confederate Government"). He ended up living there the rest of his life. The house and plantation have since been designated as a National Historic Landmark, recognized and listed by the U.S. Department of the Interior and its National Park Service (established 1916).

Ill with cancer, in 1878 Sarah Ellis Dorsey remade her will, bequeathing "Beauvoir" to Jefferson Davis and his surviving daughter, Varina Anne Davis, known as "Winnie". His wife Varina Howell Davis was also living there, and the three Davises lived there until former President Davis' death in 1889. His young second wife and widow, (Varina Howell Davis) and her daughter moved to New York City in 1891.

After the death of Varina Anne Davis ("Winnie") in 1898, Varina Howell Davis inherited the plantation. She sold it in 1902 to the Mississippi Division, of the Sons of Confederate Veterans with the stipulation that it be used as a Confederate state veterans home and later as a memorial to her husband. Barracks were built nearby and the property was used as such a home until 1953, with the death of the last veteran of the Confederate States Army in Mississippi. 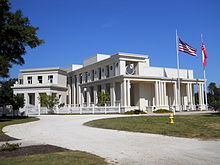