Lansdowne is a historic mansion that is listed on the National Register of Historic Places in Natchez, Adams County, Mississippi. It was originally built as the owner's residence on a 727-acre antebellum plantation.  It is located on Marshall Road, one mile north of the Natchez city limits.[2]

George M. Marshall, a Princeton University graduate, and his new bride Charlotte Hunt built the mansion on their Lansdowne Plantation in 1852-1853, having been given the land by Charlotte's rich, planter, father David Hunt (1779-1861).[3][4][5][6][7] The plantation was named after the couple's English friend, the Marquess of Lansdowne, probably because it made them feel like English landed gentry.[3] Lansdowne adjoined Homewood Plantation, which belonged to Charlotte's sister Catherine.[8] Before the American Civil War of 1861-1865, Lansdowne Plantation's cash crop was cotton.[9] The plantation was 727 acres in size.[10] Not being one of David Hunt's biggest plantations, he gave Charlotte and George another plantation across the Mississippi River in Louisiana as well.[8] Their Louisiana Plantation was Arcola in Tensas Parish near the Mississippi River town of Waterproof.[11]

George Marshall had twenty-two slaves on Lansdowne; and his Louisiana plantation, valued at $119,000, had 104 slaves.[12][13] In 1860 his Louisiana and Mississippi property was valued at $319,000.[10] This did not include much of his earned and inherited assets.[10] His father was Levin R. Marshall, a Natchez millionaire planter who owned 1,058 slaves just before the Civil War.[14] Levin R. Marshall lived at the suburban Natchez estate known as Richmond.[15] Portraits of Levin R. Marshall and George M. Marshall, painted by Louis Joseph Bahin, hang in the dining-room at Lansdowne.[16] 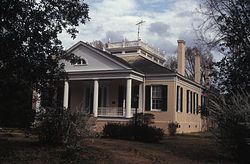