Melrose is a 15,000 square feet (1,400 m2) mansion, located in Natchez, Mississippi, that is said to reflect "perfection" in its Greek Revival design. The 80-acre (320,000 m2) estate is now part of Natchez National Historical Park and is open to the public by guided tours. The house is furnished for the period just before the Civil War. Melrose was declared a National Historic Landmark in 1974.[3][4]

John T. McMurran, a successful lawyer and planter, had come to Natchez in 1824 or 1825 from Pennsylvania, and became a law partner of future Governor of Mississippi, John A. Quitman. McMurran married in 1831, Mary Louisa Turner, daughter of Edward Turner, a prominent Mississippi Supreme Court justice and first cousin to John Quitman's wife Eliza. After a tornado ravaged Natchez in 1840, John McMurran began planning a grand mansion on the outskirts of town, and hired Maryland architect, Jacob Byers, to design the house the McMurrans named "Melrose," after Melrose Abbey in Scotland, that they had visited previously. Melrose is the only building that can be definitely attributed to Byers. The McMurran's spared no expense as the windows, doors, cornice moldings, stairways and floors are made out of the finest woods.[5] In 1865, John McMurran, hurting financially due to the American Civil War, and grieving from the deaths of their daughter and two grandchildren, sold Melrose to Elizabeth Davis, the wife of attorney and planter George Malin Davis. The couple planned on moving to Maryland, but John McMurran died in a steamboat accident in 1866.[6]

Elizabeth and George Davis purchased Melrose in 1865 as a result of Union soldiers occupying their town home, Choctaw, during the Civil War. The Davis family rarely used Melrose and it remained unoccupied for most of the next four decades. The 1883 death of George Davis as well as his daughter, Julia, as a young woman left her six-year-old son, George Malin Davis Kelly, as heir to Melrose, Choctaw and the rest of the Davis property holdings in Natchez and Louisiana. Young George was sent to New York City to be raised by his maternal grandmother. Former Davis slaves, Alice Sims and Jane Johnson are credited with being the caretakers of Melrose during this time. 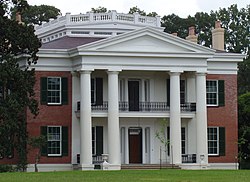